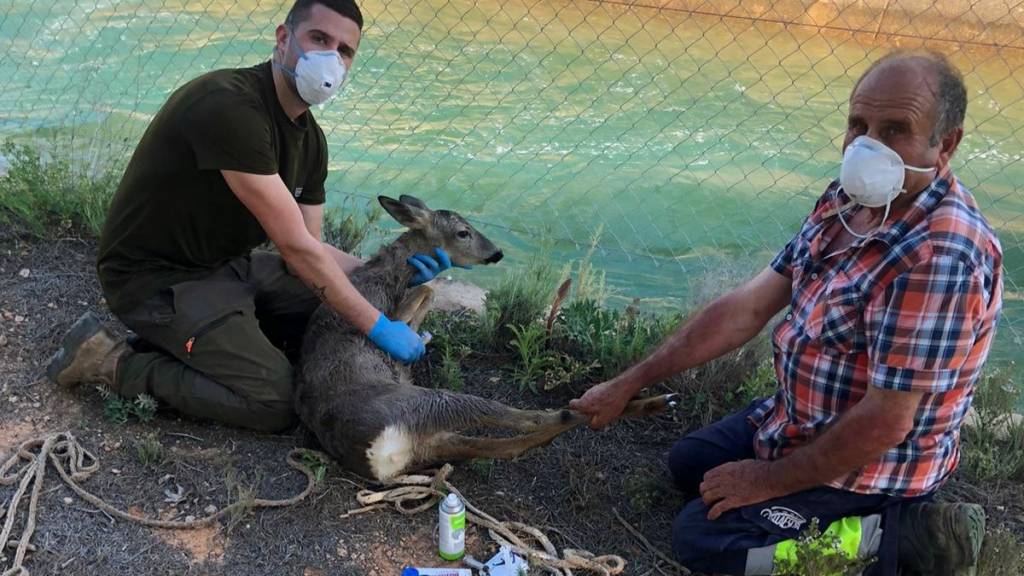 The young president of the Society of Hunters of El Picazo (Cuenca) yesterday received a call from a local farmer to warn him that two corks had fallen into the canal that crosses the section. As you've done in the last few months, you didn't hesitate to come. In all his life he has hunted only two males of this small cervid, but in the shipping Tagus-Segura he has already saved 32.

Conquenses hunters have saved the lives of two corzas that were about to drown in the Tagus-Safe shipping this Monday, May 4. Miguel Huerta, 26, president of the hunting ground in the municipality ofThe Picazo, has narrated to Jara and Sedal how this last rescue unfolded.

"We were preparing ferrets and nets to go out into the countryside to control rabbit populations when I got a call from a farmer and partner of the hedge. I had seen two corks in the Tajo-Segura shipping", begins by explaining Huerta.

After talking to the man, and after consulting with SEPRONA if they could intervene, they came to the place to try to save their lives. «It took us to get the two more than an hour, as they had recently fallen, they were very fresh and did not let the property easily", says the president.

When they took out the first one they found that she had no injury or injury, so they released her. However the second, having been trying to get out longer, had some wounds on her paws, so they proceeded to heal her and then release her in a gesture of responsibility as hunters.

The wounded cork that Miguel Huerta cured in his home

Last year, Huerta also rescued a cork that was about to die in the canal and cured it in his house. "I was walking around the hedge, taking a look at the rafts we have for the animals to drink, when I saw how in the canal there was a roe deer that was alive and could not leave the place," the young man then explained to this medium.

«I was in the last. We were trying first with the rope and a loop but we couldn't catch it, and the worst thing is that it was slowly approaching the mouth of the canal, so I didn't think twice and her.the young hunter then told us.

More rescues from this hunter

Miguel Huerta has saved more than thirty animals in the same section of the Tajo-Segura shipping in recent months. The president of the el Picazo's term came to elaborate a compilation video of all the animals they have rescued. Interestingly, he's only hunted two males in his entire life.

In addition to this great work, members of the same society assisted in the firefighting work that was declared in the mountains of the municipality Last July 4. The fire spread quickly and as soon as they saw the smoke, a score of members of the people's society took the vehicle they have to carry out the surveillance and supply of water and food in the hedge and went there.Miguel Huertawas among them andthen narrated to Jara and Sedal how they helped extinguish it.