A government CEO: "Hunting is a sadistic whim to soothe killer instincts" 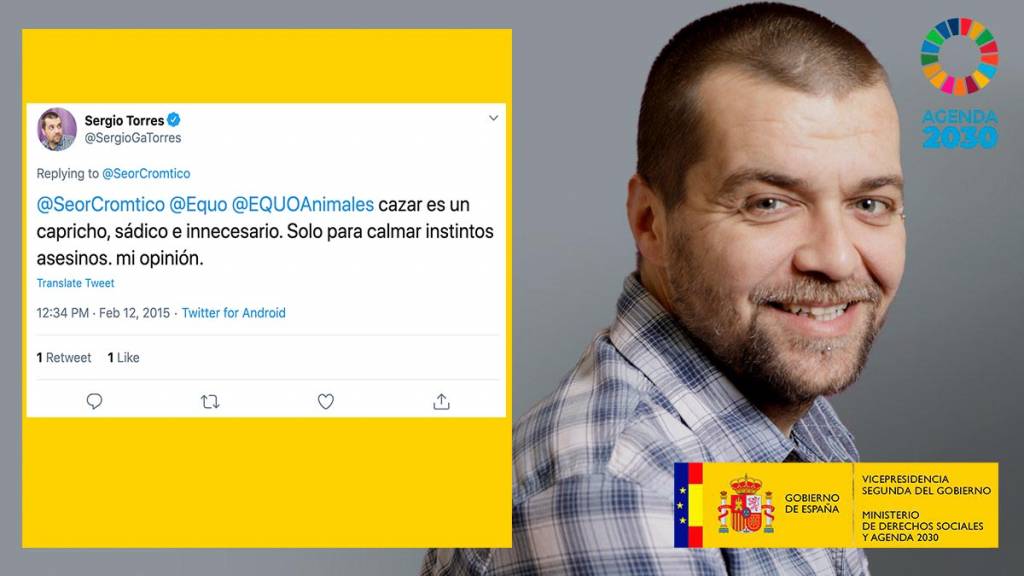 Sergio García Torres, the current Director General of Animal Rights of the Government of Pedro Sánchez, published in 2015 a tweet in which, indirectly, he called sadists and murderers the citizens who exercise their right to hunt. Now it has been rescued by a bullfighting page, and the nets have caught fire.

The Director General of Animal Rights –Undersecretariat of the Ministry of Social Rights and Agenda 2030 – of the Government of Pedro Sánchez,Sergio García Torres, published in 2015 a tweet in which he claimed that 2015 that «hunting is a sadistic and unnecessary whim just to calm killer instincts».

The message, which had gone unnoticed, has now gone viral after it was rescued by the page Arribes Taurines, dedicated to reporting on the current world of bulls. As you've been able to contrast Jara and Sedal, the tweet is still accessible and real: it belongs to the account verified officiatically by Twitter.

Sergio Garcia Torres es una de las caras más conocidas y polémicas de la facción animalista de Podemos –es vegano, anticaza y antitaurino-. A few weeks ago this same medium echoed that it had eliminated up to a dozen messages posted on the aforementioned social network on the second of January, when the government agreement between Podemos and PSOE was already a reality. However, you were 'forgotten' to delete this one in which you responded to a user on the network who asked him about his stance on indigenous races: "Hunting is a whim, sadistic and unnecessary. Just to calm out killer instincts. My opinion".

In this way, the now director general of animal rights indirectly calls more than one million Spaniards who choose to exercise their right to hunt in the wild.

The article A government CEO: "Hunting is a sadistic whim to soothe killer instincts" appears first in Jara and Sedal Magazine.