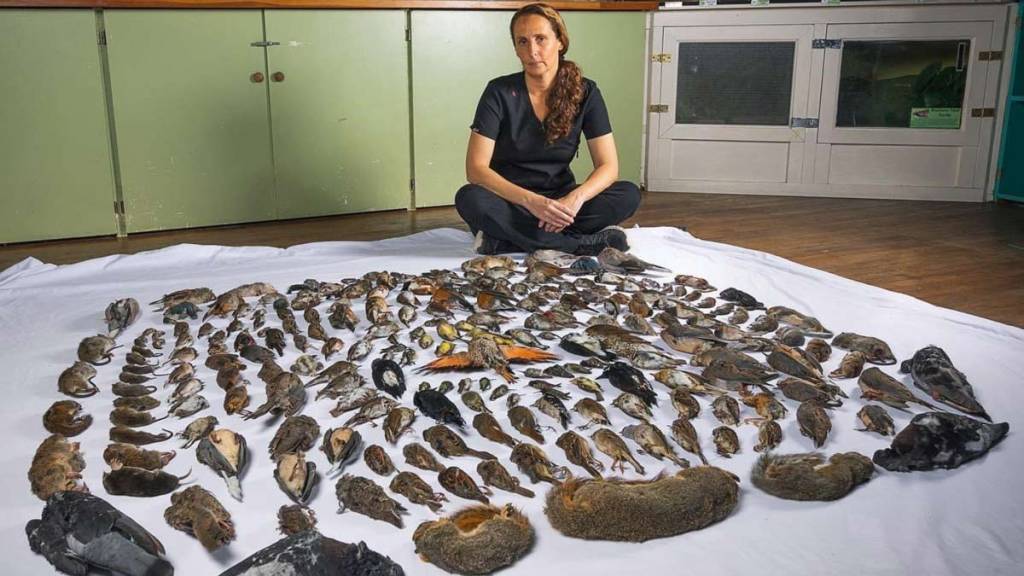 Domestic cats are a threat to biodiversity. Their lack of control can cause them to carry out authentic killings of birds, reptiles or mammals. To raise awareness of this problem and encourage its responsible ownership, an artist has photographed his victims, all of them hunted by domestic cats for a year.

¿How many are the animals
wild that a cat eats in a year? The controversy has jumped again
on the stage after the president of the National Federation of
Hunters from France,Willy Schraen, has proposed to catch the
cats that are more than 300 meters from the houses, since these felines «are
destroying biodiversity» from many places, such as so reported
Jara and Sedal last week.

According to studies such as that of University of Nottingham professor Peter Messent, from the year 2017, cats are carnivores by nature and their wild ancestors were expert solo hunters. "Among their prey were a wide variety of animals, such as small rodents, birds and insects" until they were domesticated, but "they retain many behaviors of their wild ancestors, including those related to hunting and feeding».

However, many domestic cats continue to hunt whenever the opportunity arises, although they have the ability to adapt enough to meet their dietary needs entirely within the normal environment of a pet.

«Feral cats usually make several small meals throughout the day, with dawn and dusk being the times when they most often hunt., although they can eat at any time, as their vision and hearing work perfectly in conditions of poor visibility to help them catch food," the study of the Professor Peter Messent.

Observation of feeding patterns in cats over a 24-hour period shows that cats make, on average, about 16 small meals a day. "This frequency has been noted both in observations of feral cats and in videos of domestic cats systematically provided with food. It is interesting to see that the average size of these meals is approximately equivalent to the calories provided by a very small mouse. Cats, in any case, adapt the size and frequency of their meals to the availability of food," the study adds.

Art with the prey of domestic cats to raise awareness

The artist Jak Wonderly has won the first prize of the BigPicture Natural World Photography Competition, a contest designed to raise awareness about the responsible ownership of domestic animals. It has done so with a photo of animals hunted by domestic cats for a year and picked up at a recovery center called WildCare, (in San Rafael, CA).

The California Academy of Sciences He rewarded this composition that denounces that domestic cats kill millions of birds in the United States, in addition to mammals, reptiles and other animals. "Conservation starts in our own backyard with the choices we make about our pets, fences, plants and feeders. I hope this photograph will spark debate about how our choices impact the animals around us."

The number of wild animals cats eat in a year in the U.S.

A study published in 2013 byNature Communications presented the devastating impact of cats on the rest of animal life in the United States. The conclusions indicate that cats are the main threat to wildlife, as the study claims that they are responsible for the death of among 1.4 and 3.7 billion birds and between 6.9 and 20.7 billion mammals every year only in that country.

Pete Marra, fromSmithsonian
Conservation Biology Institute, is one of the authors of the study and, in
that year, he explained toLivescience that although it is difficult to know how many birds inhabit
in the United States, in its investigation it has concluded that the
The number of them killed by this cause can reach 15% of the
total.

According to this study, a cat kills between four and 18 birds a year and eight to 21 small mammals. But the biggest threat is in the streets, which are not counted – between 30 and 80 million in the United States – that they hunt between 23 and 46 birds and between 129 and 338 small mammals each year.

Another scientific study led by the CSIC demonstrated almost a decade ago that cats have a high incidence on wild bird populations and on the environment, in general.Nearly one-third of feral domestic cats frequently capture and kill animals.This research resulted in catsthey slaughter an average of 2.1 animals per week.13% of the total deaths are birds, although they hunt everything: lizards, mice, squirrels, frogs and snakes.

Along with the damage to the animals they hunt, the cats that go outsideare vulnerable to major diseases such as leukemia and feline immunodeficiency virus. A large number of them also die in traffic accidents. The presence of these feral domestic cats threatens the survival of 8% of bird species, mammals and reptiles listed as critically endangered by the IUCN (International Union for Conservation of Nature).

The article All these animals have been hunted by domestic cats for a year appears first in Jara and Sedal Magazine.