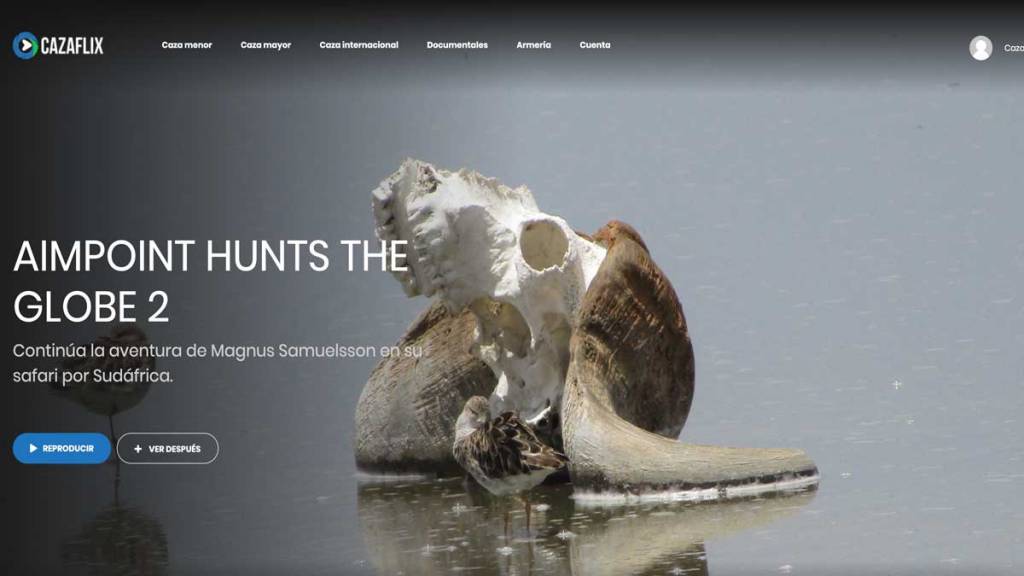 Live this fantastic adventure with Magnus Samuelsson on his hunting safari through the south of the black continent.

The black continent is a symbol for hunters around the world. We've all grown up with the legend of Africa, burned into our brains.

As it is still impossible to think about taking a plane and flying lejor to go hunting, we invite you to spend an exciting hour, living a hunting safari in first person, thanks to Cazaflix.

In this video you can accompany Magnus Samuelsson through the spectacular South African nature. In addition, the hunter is equipped with a red dot visor of the firm Aimpoint mounted on his Blaser.

If you want to enjoy an authentic hunting safari, enter Cazaflix.

Africait is the dream destination for many hunters. This continent, which is synonymous withadventure and extreme nature, houses perfect places to do a safari that you will always remember. Can you think of a better way to disconnect?

From Onís Safarisis a Spanish company captainedby Arturo de Onís, which carriesmore than 30 yearshunting and organizing trips abroad. His philosophy is clear: never take a hunter to a destination where one of our collaborators has not hunted personally before.So the positive experience is assured.

On this journey isÁlvaro de Onísthe one in charge of stepping on the sand of the Namibian mountain. AccompanyJuly, the hunter who, armed with his bow, will try to collect species such aswildebeest, orix, facochero, kudú or red hartebeest.

If you want to see how this safari unfolded, go into Cazaflix and enjoy.

Africa with bow in Cazaflix

If you are passionate about the world of bow hunting and safaris in Africa, at Cazaflix we have more options for you. Thanks toPedro AmpueroYCazaflix, we are going to Cameroon.The target will be the derby eland with bow.

The world's largest antelope lives in the savannas of Central Africa, occupying the territories of Senegal, South Sudan and, above all, Cameroon. «I like impossible challenges: that's why I traveled to the heart of Africa to try to shoot down with my bow a giant male, the largest antelope on the Black Continent,a challenge that only a few have achieved»,said Pedro Ampueroto this magazine in 2017.

The group, made up of hunter, professional and pisteros, tried to place themselves at a distance of arc in each hunting outing. Butapproaching such a giant among the tall grasses of the savannah is not an easy task.

If you want to see how Pedro Ampuero managed to overcome this challenge, go toCazaflix.com.

The article Hunting safari in South Africa with Aimpoint appears first in Jara and Sedal Magazine.