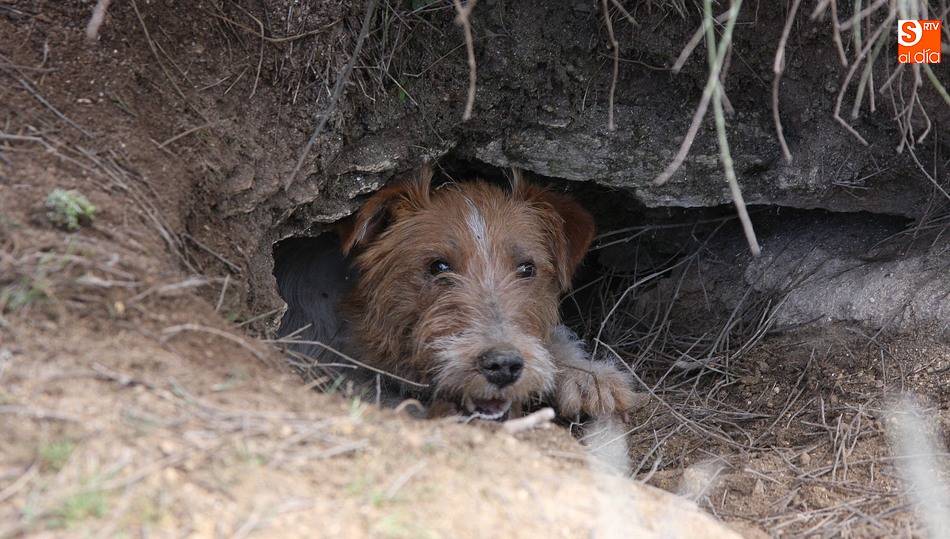 Hunting Dogs - Burrow Breeds
Then just a few of the ones I consider the best breeds to go hunting.
Foxterrier
Maximum height: 40 centimeters.
Weight: 8 kilos in males and 7 in females.
Ears: folded forward
Tail: amputated and upright. The partial amputation of this member is now more due to a esteti motive
Fur: both hard hair and smooth hair, thick fur.
Color: dark spots on white gondo.
Origin: Great Britain
History: The standard of the breed was set in 1876. Although the ancestors of the breed were dogs with short legs and large head, physically somewhat different from the current ones, the breed has maintained its hunting and fighting nature. The existence of these dogs since the fourteenth century is known for certain, at which time they were used in beatings to remove foxes and other wild animals from their burrows.
Description: Characterized by a long, narrow head. The hard-haired Foxterrier (pictured) is stetically different from the smooth-haired foxterrier, although both share the same characteristic profile.
Character: Dog naturally battler in hunting, in addition to very intelligent. Fiery and with character, it is an animal that needs attention. It is necessary to keep them active and thin to continue to preserve their vividness.
Use: Due to its convative character, the foxterrier has become a good watchdog. In hunting it is a brave dog currently used only by professionals, able to remove from its burrow all kinds of animals such as foxes, weasels and badgers.
Dachshund
Ears: fallen and proportioned.
Tail: long and sharp.
Fur: hard and dense, equipped with beard and brush on the eyebrows.
Color: of all kinds but never with white spots.
Origin: Germany
History: This dog has its origins in the Dachshund, a genuinely German breed that already has seven centuries of life. The teckle was obtained after the crossing of the smooth-haired Dachshund with the Schnauzer and Dandie Dinmont Temer, just a century ago.
Description: There are three varieties of teckle: hard hair, short hair and long hair, this being the common standard for all of them, except logical of their fur.
You will need hair care, having to undergo stripping (pulling superfluous hair with your fingers) at least twice a year.
Character: Attentive, affectionate and quiet, very adaptable to family life.
Use: Widely used for small game hunting and as a burrow dog. Indefatigable and courageous. Due to its small size it has the ability to reach places generally inaccessible to other dogs.
Jagdterrier
Height: Up to 40 cm., both female and male.
Weight: Males of 9 to 10 kilos, and females of 7 kilos.
Ears: Semi-erect in v" shape, attached the tips to the head.
Tail: Shortened to one third of its length and low.
Fur: Rough, hard and dense, either hard smooth hair.
Color: Dark brown black layer, with reddish veins.
Origin: Germany
Story: Direct descendant of the Foxterrier. The breeding of black-red Terrier dogs began in the search for a breed that would be oriented exclusively to hunting, more specifically to the hunting of burrow. After several crosses of these terriers with the original English Terrier and the Terrier of Welsh, a dog has been obtained that, as the years pass, is gaining in courage and in readiness to hunt.
Description: Strong, vigorous, muscular, light, short pitch and, depending on the line, with smaller size and different fur. Being the lowest Czechoslovak line and short and thin hair, and German line of hair harder and longer.
It is a dog normally very resistant and healthy, although its longevity is diminished by its hyperactivity and excessive nervousness.
Character: Cheerful, nervous, with an unbridled impulse towards freedom provided by the countryside and hunting. It is a frantic dog that does not stand out precisely for its docility, it is not advisable to have it with males of the same species, since it can become violent with them.
Use: In addition to being a great animal for hunting in burrow, it is highly valued in jumping hunting, due to its great tenacity and daring. In hunting, it only shows its combativeness against the different prey, from wild boar foxes to rabbits.
Dogs characteristic because they are able to maintain a still position when warning of the presence of the prey. That state of trance and tension is called a sample," and in this section we can see real experts in their