They get caught with a banned hunting rifle, the mouth of a boar and a paperless dog in full quarantine 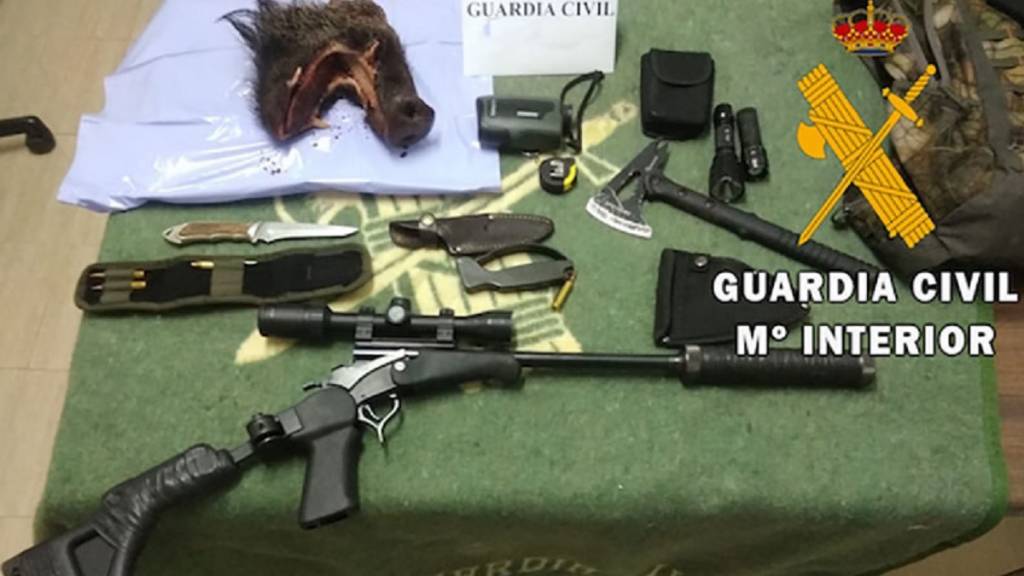 The criminals skipped confinement and Civil Guard agents arrested them by finding inside the vehicle a ready-to-fire folding butt rifle, a hunting dog without documentation, knives, axes and the snout of a newly dejected boar.

The Civil Guard has arrested two suspected stealths without a weapons permit who were caught in full quarantine in an SUV where a modified rifle prepared to fire and the full snout of a boar were located.

The Almeria Command has reported in a note collected by Efe that those arrested are J.O.F., 29, neighbor of Albox (Almería) and J.E.P., 47 years old and domicile in Macael (Almería), who are commits an offence relating to the protection of flora and fauna (furtivism) and unlawful possession of weapons.

The agents began their performance after seeing several
occasions an off-road vehicle touring forest tracks in the area
Belluga de Serón (Almería), making uns permitted trips in the
alarm for the COVID-19 health crisis. Finally, they identified
to their occupants.

They found that a dog they were carrying lacked documentation and that in the back was a backpack with machetes, axes and inside a plastic bag with recent traces of blood, another bag in which they located the snout of a boar.

Also, hidden in a rear seat compartment,
Found a rifle with a view
telescopic and folding stock, ammunition and ready to fire with a
cartridge only allowed in sports shooting activities.

Reported for raging hares during quarantine, during breeding season and with undocumented dogs

The Civil Guard has also reported in recent daystwo individuals who skipped confinement during the alarm state to rag at a time of veda in La Puerta de Segura (Jaén). We'll tell you here.

The article They get caught with a banned hunting rifle, the mouth of a boar and a paperless dog in full quarantine appears first in Jara and Sedal Magazine.