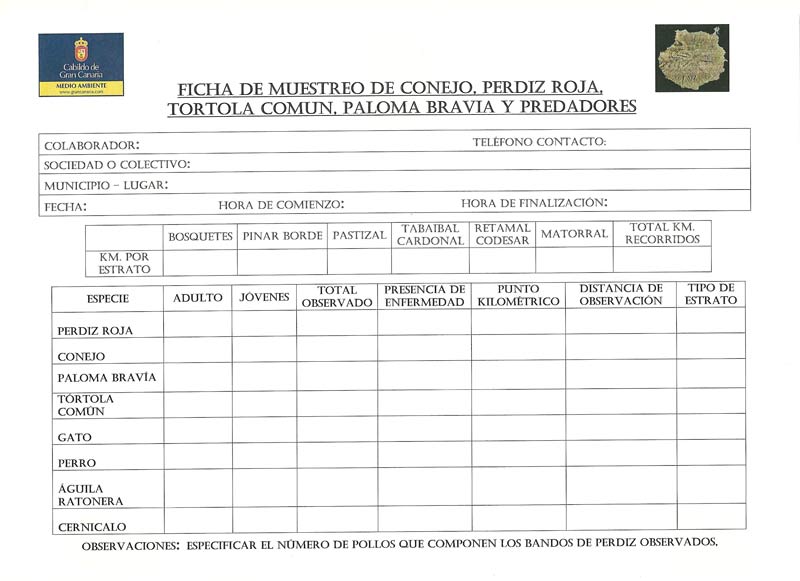 CENSUS OF HUNTING SPECIES IN GRAN CANARIA
Last Tuesday, May 10, 2011, the Ministry of the Environment of the Cabildo Insular de Gran Canaria convened the island's hunting entities to conduct the precaza censuses, in order to assess the state of the field and its species with a view to the lifting of the veda.
The meeting, chaired by the technician of the Administration Mr. Miguel Romero Gil, was attended by representatives of the Canarian Association of Hunting Entities (ACEC), AFECAM, Society of Hunters of Gran Canaria and Society of Hunters El Colmenar, as well as other groups. As in previous years, with the altruistic collaboration of some hunters, vehicle walking tours are made to check the status of the populations of partridges, rabbits, lovebirds, pigeons, and other species that feed on them such as aguilillas, kesters even dogs and feral cats.
The method is very simple. Collaborating hunters make journeys of approximately 10 kilometers on foot by vehicle – with speeds of less than 15 km/h – on a weekly basis, on the same days chosen, and during the first 2 hours after dawn before dusk. In this transect, as the technicians call it, hunters are noting the species they observe, the number and distance to which the fauna is, as basic data, since others are added. In the end, all itineraries result in the I.K.A (Kilometer Index of Abundance) of the different species. The maximum delivery time for results achieved is set this year for May 31. The latter date is premature, as wildlife species are in the middle of the breeding period and their life expectancy and the data obtained may vary between decision-making and the lifting of the vede. However, with references from the previous four years in which these counts have been made, the densities - number of specimens per hectare - that are obtained come very close to reality.
With the results obtained taken to the Island Hunting Council of Gran Canaria - the advisory body of the Cabildo -, the decision is made of the periods, days, methods of capture and species allowed with the aim of making the exercise of the activity for that year as orderly and sustainable as possible. In the after all, all this set of factors such as number of dogs to use, hunters per crew, catch quotas, working days, prohibited places for hunting, etc.... it is elevated to the Regional Hunting Council - the advisory body of the Government of the Canary Islands - from where the final order for the entire archipelago will emanate as the deadline of 30 June to be published in the Official Gazette of the Canary Islands. In this sense, for a long time now, the Administration is demanded that the dates of the Hunting Councils be delayed so that the data obtained from the counts are in full fit the reality. Taking into account that between the taking of them and the start of the hunt they spend at least 2 months. Breeding and breeding time vital for the continuity of the biological cycles of the kinetic species that can be truncated by calimas, disease outbreaks etc., significantly decreasing in that period the number of specimens present in the field.
In contrast to this, a proposal for the order of vedas and the opening of the training areas for Gran Canaria emanating from some spokespersons has recently appeared, from those who proclaim themselves athletes and representatives thereof, which lacks all common sense as the spokesmen of the proposal know (because they are part of the Island Hunting Council) , because the Insular Hunting Plan marks the openings of training areas and vede orders for the next 5 seasons, it may vary significantly but never approach such absurdity raised. Especially, when the status of the field has not yet been completed and they are aware of what the Island Hunting Plan says. Populist proposals from some gentlemen who want to make and undo with a rather personal than general interest, whose inclination is not to work for our environment, hunting and hunters, but to continue living on them as before.