Hunt an old roe deer with three horns, seven tips and a lump on its neck 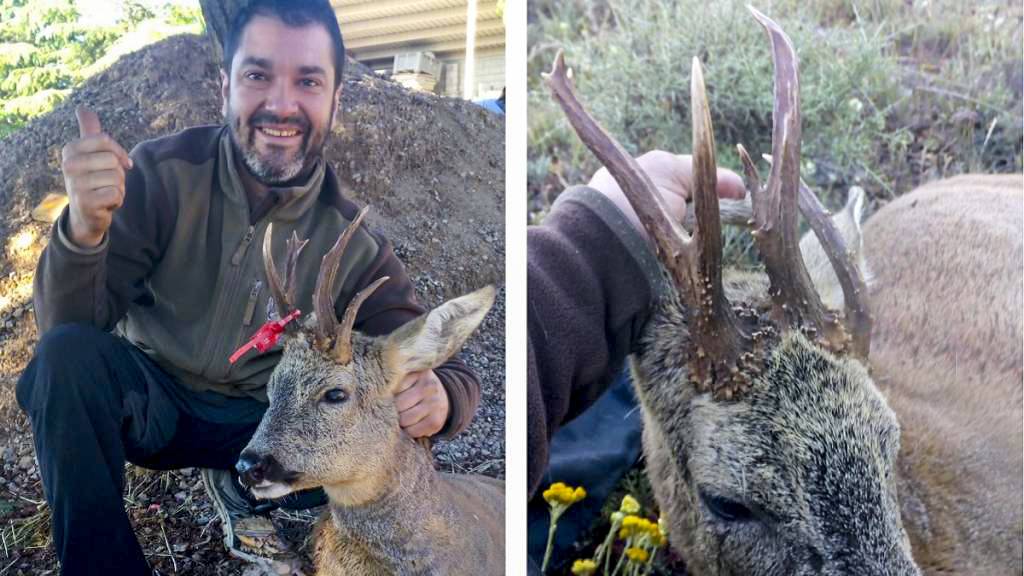 This hunter gets up early and luck helps him to shoot down an extraordinary and rare specimen of old roe deer with three horns, seven tips and a strange lump of fat on the neck that left him speechless.

The Aragonese hunter Miguel Deza, born in the Zaragoza town ofPaniza, has beaten at dawn this Saturday, June 6, a spectacular roe deer with three horns, seven tips and with a rare lump of fat on the neck. He has done so just a week after his father, also named Miguel Deza, narrate in Jara and Sedal the lance of another roe deer with 11 points.

Deza son has narrated to this medium all the details of the
throw this spectacular animal: «Era
very old", he begins by explaining while looking at the animal's trophy and its
three horns. "Some are small, but have seven tips in total," he explains.
-in one of the horns three small dots come out-.

Miguel got up early this Saturday to be ready at dawn and see if today luck was on his side. At first it seemed not, but finally accompanied him. "The morning didn't start well. I was seeing females and some small males, but nothing remarkable. I was already leaving and, when I got to the car, I saw in the distance this spectacular specimen", he says. He began a lance that will never be forgotten.

This was the lance with the roe deer

Little by little he got closer until he reached about a hundred meters from where the roe deer was: "At first I had a lot of nerves and hurry, because I did not know how much the animal could hold me standing there, but I thought it was better to calm down and go little by little making the entrance».

And this Aragonese hunter did it perfectly: "When I was a hundred meters from the animal, I thought it was the optimal time to shoot, and everything went perfectly," he says about the moment he shot him in the knuckle with his Winchester SXR .300 caliber rifle. He claims that it is a weapon "very cheap but that I do not leave it for anything in the world", in addition to Geco ammunition of 165 grains and plastic tip.

When he reached the roe deer, he could see the specimen. «It was a rare but beautiful animal, as well as very old.», says proud of having contributed to the charisma manager of the ecosystem of any hunter who kills an animal already in age. In addition, I had another surprise: «On his neck he had a lump that looked like fat. Opening it, a greenish substance came out that smelled terrible.", he says.

Miguel Deza Sr., 76, is one of the few hunters who have had the opportunity to take down an 11-pointed roe deer. Although the launch took place last year, it has been now when he has been encouraged to bring it to light through Jara and Sedal. This is their story.

The article Hunt an old roe deer with three horns, seven tips and a lump on its neck appears first in Jara and Sedal Magazine.